The government has made a massive stealth attack on the NHS over the course of the last few days. If anything about this worries you, you might want to write to your MP to find out what they’re doing about it. On 9th July in the House of Lords, the government proposed a “commission of inquiry” into whether the NHS should continue to be publicly funded or whether it should be funded by private insurance and co-payments. On 16th July Jeremy Hunt, Secretary of State for Health, made a major speech outlining a 25 year NHS privatisation plan. And in between, the government rolled out proposed new anti-union legislation, just in time to make it impossible for Unions to make effective protests to defend the NHS – and other public services that are up for huge new cuts.

A Commission of Inquiry into ending public funding of the NHS

The Department of Health’s Minister for Productivity Lord Prior (recently appointed to the House of Lords from his position as Chair of the NHS Care Quality Commission) said the assumption of a tax-funded NHS ‘has to be questioned’. Speakers from different parties attacked the principle of public funding for the NHS. Lord Warner (Lab) said that a “wise government” should “now begin the process of helping the public engage in a discourse” about how to fund the NHS. The Tory Lord Cormack said

“Nothing must be off limits …all forms of funding must be looked at.”

There was a general call for a commission. At the end of the debate, Prior said that though he “personally” liked a tax-funded system,

“…if demand for healthcare outstrips growth in the economy for a prolonged period, of course that premise has to be questioned.”

So does David Cameron still stand by what he said in 2011?

“Let me make this clear – we will not be moving towards an insurance scheme, we will not introduce an American-style private system. In this country, we have this most wonderful, precious institution and idea. That whenever you’re ill, however rich you are, you can walk into a hospital or surgery and get treated for free. No questions asked. No cash asked. I will never put that at risk.”

In Birmingham, also on 9th July, an NHS Procurement trade show took place. NHS campaigners from around the country attended the Trade Show in order to protest at galloping NHS privatisation. The keynote speech by John Warrington, Deputy Director of the Dept of Health’s Procurement, Investment and Commercial Division, brought companies up to speed with Lord Carter’s review of Operational Productivity in NHS Providers. Warrington returned repeatedly to Lord Carter’s ‘biggest difficulty’: the need to reduce staffing costs. (This might explain the numerous trade stands selling agency staffing and digitech innovations.) Other themes in Warrington’s keynote speech to the corporates were massive changes to the NHS from:

Jeremy Hunt’s speech to the Kings Fund on 16th June outlined his 25 year plan for the NHS. His demand for a seven-day working week for doctors has hit the headlines, and the BMA has called it a “wholesale attack” on doctors. This is Hunt’s plan to solve Lord Carter’s “biggest difficulty”:

“The fact is that the government is getting the hospital sector ready for private company take-over, and private companies want cold planned routine waiting list work, such as outpatient clinics and operations performed in unsocial hours, in order to make a profit. The 2003/4 consultant contract, stipulates that for consultants to do such cold planned work in the evenings and at weekends they should be paid time and third. It’s not as if consultants do not already do work in unsocial hours. They do. But this is for emergency work.” “Jeremy Hunt and David Cameron are in a hurry to accelerate the handing over of NHS clinical services to big business. They are therefore getting ready for a confrontation with the doctors. They think that they are an easy touch. “Then the plan is to take on the rest of the NHS staff in a similar way by forcing through the elimination of unsocial hours supplements. That would mean changing the Agenda for Change national contract agreements.”

Hunt’s speech announced that the government is paying £12.5m over 5 years to an American healthcare corporation, Virginia Mason hospital in Seattle, to train some NHS hospital staff  in the American company’s methods and principles. Which in fact are Japanese car manufacturing methods – the Toyota Lean system. Leeds Teaching Hospitals is one of the five Trusts that are part of this private American hospital training scheme. Together, the five Trusts have a combined turnover of more than £2bn. Each trust will be expected to establish a “transformation team and board to oversee its work within the programme.” Virginia Mason will also “develop and embed lean techniques and processes” in 120 members of the Trust Development Agency team. The Virginia Mason hospital Board is stuffed with people from management consultancy companies like Ernst and Young and Accenture, pharmaceutical companies, finance companies, General Electric and Boeing and others. The tender document for the scheme said that criteria for selecting the Trusts for training by Virginia Mason hospital were based on:

“executives’ sense of cultural impediments to Lean including beliefs about clinicians’ reactions to ‘standard work’ required to reduce waste and improve efficiency, plans they have made or are executing to address cultural impediments they have already identified, the degree to which they believe the consultant doctors and other clinical staff are on the ‘same page’ and share executives’ vision for the future of the trust (and need to improve); and the current state of doctor leadership”.

Of course the biggest source of waste in the NHS is the £multi-billion marketisation and privatisation programme which is leaching NHS money into the coffers of management consultants, accountants and lawyers, but the Department of Health isn’t bothered about that.

Getting the hospital sector ready for private company takeover

The Department of Health wants the public to think that both the 7 day working week plan and the American hospital training scheme for NHS hospitals are about improving patient safety. But retired surgeon and BMA member Anna Athow said:

“If the government was really bothered about excess deaths in hospitals why have they closed 52% of hospital beds in the last 25 years, such that for many months over this Winter, scores of hospitals A&E departments were dangerously overcrowded with seriously ill patients piled up on trolleys in corridors, waiting for admission, with ambulances queued outside.  15 hospitals declared Major Internal Incidents which is totally unprecedented, which means they had to call in staff from home to cope. Many more hospitals would have done the same but were instructed not to. The mortality figures were not revealed.”

Anna Atthow will be leading an NHS campaigners’ workshop to find out about NHS England’s Five Year Forward View at Dewsbury Women’s Centre on Saturday 25th July. Info and sign up here

“There is only one way these attacks can be answered and that is by organising industrial action. In actual fact the BMA must ‘get real’. The time for huffing and puffing is over. The government is deadly serious about getting a cheap labour, compliant workforce in the NHS, and breaking national contracts ready for the privatisation of clinical services outlined in Simon Stevens Five Year Forward View. The anti -union laws are being hurried through to stack this fight in the government’s favour. The sooner the BMA pick up the gauntlet and organise the whole union to resist this attack and defend national contracts and the NHS as a public service with a public sector workforce, the better. There has to be an alliance of all health unions. The support of all public sector workers is needed in this struggle.”

The Tory Government is pushing through a new Trade Union Bill which demands a higher proportion of members’ votes in favour of strike action (40%) than the government has got from the electorate to run the country (24%). Duh? 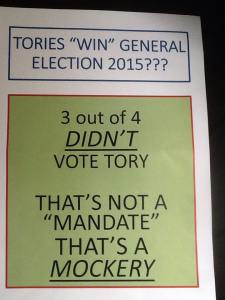 The new bill would also change the law so agency workers can be brought in during strikes and would criminalise picketers if there are more than 6 of them. Thus criminalising our midwives, among others.

The TUC General Secretary Frances O’Grady points out the significance of the timing of this new proposed legislation:

“Ministers are about to make huge cuts to public services – libraries, social care, children’s centres – and they want to stop the workforce from protesting. Even areas the government claims are protected, like health and education, are still suffering at the frontline from their ideological drive to shrink the state. A strike may cause inconvenience for one day, but losing a local children’s centre, losing social care provision or getting stuck at the back of a growing NHS queue all cause far greater harm to British people.”

If any or all of this worries you, you might want to ask your MP to find out what’s going on. And remember both Tory and Labour Lords attacked the principle of public funding, so please write to your MP no matter what party they’re in. Info sources: https://opendemocracy.net/ournhs/richard-grimes/government-moves-to-consider-nhs-user-charges http://www.huffingtonpost.co.uk/frances-o-grady/trade-unions-bill_b_7807864.html?utm_hp_ref=uk&ncid=tweetlnkushpmg00000067