The West Yorkshire & Harrogate Sustainability and Transformation Plan (STP) gives only a smidgen of  information about how it is to cut nearly £1bn from NHS and social care spending by 2020/21, compared to what would be spent if current levels of services were to be maintained.

But the 2017-19 STP contracts are to be signed on 23rd December, with the public and NHS front line staff in full ignorance of what are going to be whacking great cuts.

The STP has not published key financial information, including:

Please ask your Councillors and the STP Programme Leader Rob Webster to provide this missing information NOW. Before it’s too late.

This is all the STP says:

There are a few bar charts.

There is a table showing their “solutions” to the underfunding 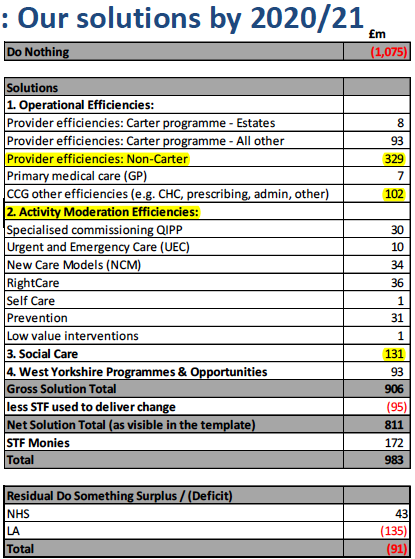 The Operational Efficiencies in the table are a cut of £420m to hospitals budgets. There is also a £7m cut to primary medical care, and a £102m “efficiency” cut to Clinical Commissioning Groups’ spending on admin and “other”, as well as on CHC= Continuing Healthcare (this is free care outside of hospital for people with long term illness) and Prescribing.

Since the STP plans to shift hospital services into the community,  cutting spending on long term care out of hospital doesn’t look like such a great idea.

Cuts to prescribing are already having bad effects on patients.

One woman with asthma who has been prescribed a cheaper SALAMOL OR SALBUTAMOL inhaler instead of her normal Ventolin inhaler found that she had to have at least 7 or 8 puffs to be able to breathe clearly again instead of just one.  At 35 weeks pregnant she woke up in the night unable to breathe and  had over 20 puffs on the new inhaler without it helping  her breathing. She had to go straight to A&E and ended up on a nebuliser in hospital. By the time she got to hospital she  had used a full inhaler which had not helped at all.

A pharmacist at the hospital told her that many people were reporting that the Salamol/Salbutamol inhalers were not working properly but that they were being prescribed because they are cheaper.  She said,

“I’ve been back to my doctor and you now have to request to change back to the old inhaler. It’s shocking that they would change something so important without telling you first.”

These cuts are about people and there is NO economic need for them.

There is no economic need for this underfunding of the NHS and local government services.

Rather than challenge the government’s underfunding,  the STP blames the aging population and people with complex needs for costing the NHS too much. Even though the OECD estimates that demographic changes will only add 0.3% to UK health and long term care expenditure by 2060. (Maisonneuve C, Martins J. The future of health and long term care spending. OECD Journal: Economic Studies. Volume 2014)

There are other reasons for the rising costs of the NHS – quite apart from rising costs of drugs and medical technologies. Cuts in social care and other forms of social security significantly increase the demand for care from the NHS. Despite the  Autumn 2015 Comprehensive spending review announcement that councils could raise council tax by 2% to offset cuts to social care – which falls hardest on people with less money – the Kings Fund showed that real terms spending on social care is expected to fall over the next three years.

The resulting cuts, such as the closure of drop-in centres for pensioners and cuts to domiciliary care and other local social and mental health services, drives up attendances at A&E and hospital admissions; while residential and home care cuts  lead to delayed discharges of patients from hospital.

Demand reduction, they call it.

They have schemes to decide on “clinical thresholds” for allowing elective care, and restricting what they call procedures of low value/limited clinical value.

They expect £50M savings from reduction of “low value clinical procedures” and ensuring patients are “optimised for surgery”.

Part of this elective care demand reduction is about putting controls on GPs’ powers to refer. It looks as if they may be going down the road of requiring GPs to send their proposed referrals to a company to decide whether or not they should go ahead. There was a very cross article in Pulse about this recently.

New care models, which are to cut costs by £34m, are about taking services out of hospital and providing them in the community, and keeping patients most at risk of emergency and acute hospital admission out of hospital – even though this has not been shown to work.

There will shortly be a separate blog post on “activity moderation efficiencies” with more information.

The cuts are based on some assumptions

Where is this investment coming from?

They need “transformational capital”. How much and where’s it coming from?

They are relying on receipt of Transformation Funds in the early years in order to “implement solutions” by bringing them forward from later to earlier years.

They want the “transformation resources”  to be “devolved for management at WY & Harrogate level” in order to enable rapid change and spend the money on “our greatest opportunities”. Which are?

The STP finances are based on the assumption that in 2016/17 the organisations will collectively meet their “control totals”. These are spending limits imposed on all the hospital trusts, the ambulance trust and Clinical Commissioning Groups.

The STP  says if this doesn’t happen, this will “bring significant risks in the outer years” ie towards 2020/21 – and that at the moment the NHS providers are £36m from break even which means they need £39m more to meet NHS Improvement’s control totals. They say they think they will be able to sort this through discussions with NHS Improvement and through receipt of transformation funding from the Sustainability and Transformation Fund.

The STP includes  a bar chart showing the expected financial position in 2017/18 – if  2016/17 finances don’t screw up too badly. And things aren’t looking too good on that front.

Why does it show an increased control total on top of the anticipated control total,  and a reduction in Sustainablity and Transformation Funding, so that the actual underfunding (i refuse to call it a deficit) is about £20m bigger than the “anticipated position”?

That is the sum total of financial info for the West Yorkshire & Harrogate footprint.

So what does it mean?

The table “solutions to finance and efficiency gap shows different types of cuts.

There will shortly be new blog posts about them. Please check back soon.