Centene Corporation contract with Nottingham NHS organisations is £2.7m can of worms

A Spanish health management company, Ribera Salud, is under police investigation for corruption with regard to its contracts with the Valencia regional government and some of its subcontractors.

Ribera Salud is half-owned by the US health insurance company Centene Corporation, which has just been hired by Greater Nottingham Accountable Care System via a £2.7m contract brokered by the notoriously useless company, Capita.

The Alzira model has been on the back foot in Spain since 2013, when mass health workers’ strikes combined with a High Court injunction forced the resignation of Madrid’s health minister and the Madrid government’s abandonment of its plan to impose the Alzira system on six public hospitals.

The rout of the Alzira system in Spain has continued with a new law passed by the Green/Socialist/Podemos regional government in Valencia which brings the health service back into direct public management and provision, and with the recent police investigation into Ribera Salud corruption.

Regardless, the Alzira model is being touted as the preferred option for the Greater Nottingham Accountable Care System.

Dr Stephen Shortt, a Nottingham doctorpreneur with a bewildering array of jobs  that seems to include the GP Lead for the Multispeciality Community Provider community interest company Principia Partners in Health, clinical lead for Rushcliffe Clinical Commissioning Group – one of four clinical commissioning groups in the Greater Nottingham Accountable Care System – as well as accountable care system lead in Greater Nottingham  is unaccountably jubilant that Centene will be setting up the ACS. The Nottingham Post quotes him as saying:

“The scale of transformation is unprecedented in England, but it has been achieved by health systems in other parts of the world such as Europe.
“That’s why we have to take this opportunity to learn from organisations with international experience of transformation, such as Centene’s work with Ribera Salud on the internationally renowned Alzira model in Valencia, Spain.”

For its part, according to the cheerleading Dr Stephen Shortt, Centene’s ambition is

“to be part of bringing about the successful delivery of a new model of care in England, gaining knowledge and experience in the English NHS and Care system.” (slide 5)

According to Dr Shortt,

“Ribera and Centene have transformed public care systems across twenty-five states in America and in Spain. Centene is not a provider but an integrator of care.”

In March 2017, Dr Shortt explained that the role of Accountable Care System integrator is:

“to provide the necessary skill; experience and finance to enable the delivery of the Sustainability and Transformation Plan.”

Here’s the downloadable Nottingham and Nottinghamshire Sustainability and Transformation Partnership Press Release on Centene, with many fulsome quotes from Dr Shortt.

In this role, Centene is to “assist in the back office function of the ACS”. The ACS is to include not just NHS organisations, but the private company Circle (the one that made a mess of running England’s only privatised NHS hospital and handed back the contract when it realised it couldn’t make a profit); City Care Partnerships community interest company; and care homes that are privately owned and run by companies including BUPA, Four Seasons and Avery Healthcare Group.

It also passes risk to providers. In Nottingham’s Accountable Care System the highest risk would fall on the acute sector (acute and emergency hospitals) and the local authority, but as an Accountable Care System the risk would be shared. This is meant to incentivise greater efficiency, but is far more likely to incentivise cherry picking elective care patients whose treatment represents good value for money – and to hell with the rest. This is what happened with the Alzira system of “accountable care” in Spain.

It is one of many reasons why the Green/Socialist/Podemos coalition government in Valencia – elected on a platform of stopping and reversing health service privatisation, among other things – has just changed the law to bring the health service back into direct public ownership and management, to scrap the Alzira model and to provide universal access to health care.

The Valencia regional government have also ordered Ribera Salud to come up with audited accounts – which it hasn’t produced since 2008.

Carmen Monton, the Valencia regional government Minister of Health and Public Health, told the newspaper El Pais that for a long time the management of Ribera Salud has absolutely lacked control. The Alzira hospital has never been audited by the Comptes Sindicatura. There have been no audited accounts since 2008 and she added:

“The opacity was tremendous.”

The police are now investigating Ribera Salud’s overcharging of 2.6 million euros in emergency assistance and other areas and are also investigating the company for corruption in the award of subcontracts. The Anti-Corruption Prosecutor’s Office in Valencia have named Alberto de Rosa, CEO of Ribera Salud, and Pablo Gallart, the company’s director, as vicariously liable in the alleged scam.

Alberto de Rosa is a bit of a darling of Jeremy Hunt, the Kings Fund, NHS England and its flunkeys. 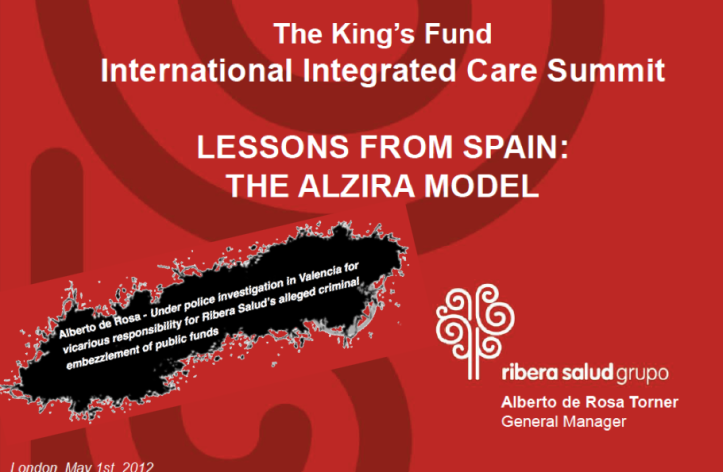 Do Nottingham ACS know or care about any of this? It doesn’t seem like it.

The Centene contract is a £2.7m Can of Worms

So atrocious is the Greater Nottingham Accountable Care System’s £2.7m contract with Centene, to “advise” them on how to turn the Notts health and social care system into the discredited Alzira system, 999 Call for the NHS has created a new “Most Costly Can of Worms” Award and bestowed it on Notts Accountable Care System Doctorpreneur Stephen Shortt who is cheerleading for Alzira/Centene. With apologies to worms who we know do a great job of keeping soil healthy.

Ribera Salud has been half-owned by Centene since 2014, when it bought Bankia’s Ribera Salud shares after the European Commission ordered Bankia to divest and sell its shares in Ribera Salud.

In 2012 Bankia had been bailed out by the Spanish government after declaring a profit of €328m in May and two weeks later adjusting that figure to a loss of €4.3bn. One year on, this was revised to €19bn – the largest corporate loss in Spanish history.

One of these executives shot himself last month while awaiting the outcome of his appeal against a 6 year prison sentence for embezzling the banks money, putting it in an offshore account and using it to invest in Spanish companies.

It emerged in 2016 that Centene’s purchase of Bankia’s shares in Ribera Salud was conditional on it buying the rest of the Ribera Salud shares from another Spanish bank in 2019.

In this way, Centene Corporation got a foot in the door in the Valencia health market, where Ribera Salud controlled three Hospitals in the provinces of Valencia and Alicante (Alzira, Torrevieja and Elche). Just before the new Green/Socialist/Podemos government slammed the door shut, with its law to restore the health service to direct public management and provision, and the police started digging the dirt on Ribera Salud.

The assumption seems to be that Centene bought into Ribera Salud as a means of accessing the health care “market” in Latin America and in the European Union.

Luisa Lores, a radiologist at the Pontevedra Hospital Complex and a member of the Federation of Associations for the Defense of Public Health, points out that health management companies like Ribera Alud are now looking at a new commodification of health. They are moving from the management of hospitals and community and GP services, to sectors such as transplants, research or big data. 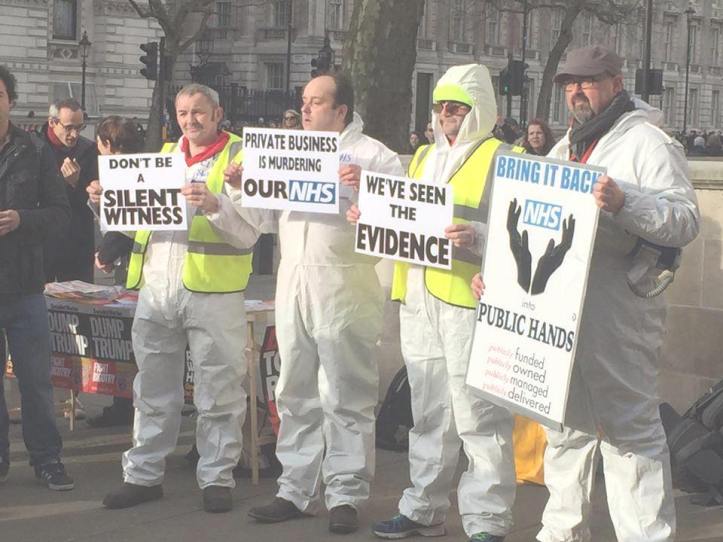 Its partners are investment holding company Pro Partners Holding of Bratislava, and Nephros S.R.O. which describes itself as a large organization in the health practioners industry that generates $5 million in annual revenue.

A Slovakian website describes Pro Diagnostic Group as a target company that provides healthcare in the field of radiology and nuclear medicine (magnetic resonance, PET/CT, X-ray, ultrasonography) in non-state medical facilities, through 6 Slovakian companies that between them operate 8 MRI facilities, one PET/CT centre and one radiology centre providing CT, USG and X-ray examinations.

A target company is a company that another company wants to acquire in a takeover.

So if I have made sense of this, Centene has bought into Ribera Salud as a way into the EU (and Latin America). In the EU it has set up a joint venture with the apparent aim of attracting takeovers so it can make lots of money out of the sale of the company.

The Centene Corporation subsidiary Ribera Salud participates in the first two hospitals under the PPP model in Latin America: Hospital Guillermo Kaelin de la Fuente and Hospital Alberto Leopoldo Barton Thompson, both in Peru. There is more about this in a PWC/ University of California report on Public-Private Partnerships in Latin America .

Plus the company’s 2016 “Guide to the Concessional Model” of public private partnerships says Ribera Salud is also the technology supplier of Florence, the company’s electronic patient record system, to several public hospitals in Chile. In addition, the Ribera Salud Group includes B2B Salud, a purchasing, logistics and shared services platform. An outdated NHS Confederation link (from before the Valencia government took back its health service fully into public hands) includes the information that B2B Salud services the centres taking part in Ribera Salud Public Private Partnerships and is open to the rest of the national territory operators.

Centene has similarly manoeuvred to enter the NHS, by setting up Centene UK. This holding company, registered at Companies House as a business carrying out “Activities of other holding companies not elsewhere classified”, was set up in Feb 2016.  In 2016, according to Can of Worms award recipient and Greater Nottingham accountable care system lead, Dr Stephen Shortt, Centene UK worked with Greater Nottingham STP:

“to identify ways that the different health and care organisations in Greater Nottingham could be brought together.”

“Holding companies are corporations that are created for the sole purpose of obtaining and managing a controlling interest in other companies.”

Other links between Centene, Ribera Salud and the Kings Fund are sketched by  Can of Worms award recipient and Greater Nottingham accountable care system lead, Dr Stephen Shortt, who said:

“Centene UK has the experience of setting up Accountable Care Systems
internationally. Like the public sector ACS in Spain (details published by Kings Fund
here”

This is the company that is setting up the Greater Nottingham Accountable Care System. Buyer beware. The buyer is us – the public. We need to be like Madrid. 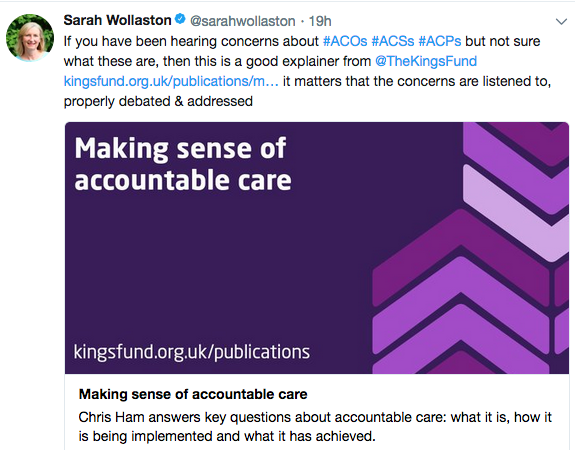 At a Kings Fund breakfast event on 19 October 2017 to assess the prospects for health and social care under the minority government, Sarah Wollaston MP also endorsed the Kings Fund/Barker Commission on the integration of NHS and social care, making this central to her pitch for:

All this is only scratching the surface of the £2.7m can of worms that Nottingham Accountable Care System has bought with our public money.