A form of contract that is a Trojan Horse for NHS cuts and privatisation has been put on hold in Greater Manchester.

But leaked minutes obtained by the Health Services Journal appear to show the campaign group’s Judicial Review was a factor in the commissioners’ decision to put the  £6bn Greater Manchester Accountable Care Organisation contract  on hold.

“We believe that the Accountable Care Organisation contract is unlawful under current NHS legislation.  And this latest decision to delay shows that NHS bosses are nervous about their actions. We have everything to win and are fighting on.”

Accountable Care Organisations are proposed new local NHS and Social Care organisations that are based on a business model used by the USA’s Medicare/Medicaid system. This only provides a limited range of healthcare for people who are too poor to pay for private health insurance.

If introduced into the English NHS, they would restrict access to NHS treatments, speed up the creation of a two tier health system where people with money pay to go private and the rest make do with a limited NHS, and increase privatisation. 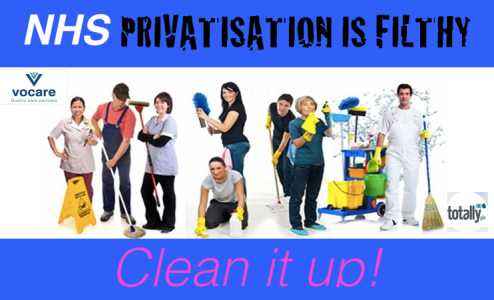 Community NHS services are one of the fastest growing areas of NHS privatisation. They are seen as a “massive market opportunity” by the Chairman of Totally Ltd, which has just bought a GP out- of-hours company as a platform for cornering the growing market in out-of-hospital care created by the move towards Accountable Care Organisations.

“We hope that while NHS England and Manchester Health and Care Commissioning committee  are pausing for thought, they might realise that this is really not the way to update the NHS into a modern, responsive, universal public service that honours the founding principles of the NHS that have served us all well for generations.

“Standards of NHS care are already under pressure, and all across the country people are finding restrictions to a range of health care. The ACO Contract would make this situation worse.”

The Health Services Journal report by Rebecca Thomas on the delayed introduction of the Accountable Care Organisation contract in Manchester is here, but it’s behind a paywall.