Integration = Cuts, if Councils’ public health plans are anything to go by.

As Local Authorities across England present their budgets for the next 3 financial years, it is obvious that public health services are in for a further serious chop. And this will hurt families on low incomes most of all.

This at a time when acute hospital services are being cut and community and public health services are meant to take up the slack in the “new care models” that are to be set up by contentious new local NHS and social care organisations based on the USA’s Medicare/Medicaid business model.  This only provides limited health care to people who can’t afford to go private.

Formerly called Accountable Care Systems, they’ve been rebranded by NHS England as Integrated Care Systems in an attempt to de-toxify them by removing the association with the Medicare/Medicaid system. The “Integration” bit is about integrating NHS and local authority public health and social care services.

So let’s have a look at how this is panning out under the savage  cuts required by the Sustainability and Transformation Plans.

A Councillor from East Devon points out that

“The latest round of government budget cuts to public health is set to result in a loss of around 30 health visitor posts across Devon, it emerged at last Thursday’s (25 January) Health and Adult Care Scrutiny meeting.”

Due to budgetary pressures in 0-5 children’s services (the contract currently managed by Virgin Care) it is anticipated that there will be a loss of 30 health visitor staff, due to ‘natural wastage’ (staff leaving and not being replaced), in the next financial year 18/19.

NHS funded mental health support in Devon schools also set to be lost. A cut of £223,000 to the public mental health in schools budget could mean that NHS funded emotional health and wellbeing service in schools will be scrapped, at a time when anxiety and depression among young people is rising.

They are gradually cutting out all means of accessing healthcare !!!

This is consistent with the stealth plan to drive those with money to go private and to turn the NHS into a version of the USA’s medicare/medicaid scheme that only provides a limited range of care for those who can’t go private. That’s what Sustainability and Transformation Plans – and now Accountable Care Systems – are for.

Unfortunately this is not just Devon. In Staffordshire Health Visitors and School Nursing Services are going to become a 0-19 service, with a cut of £250,000. Last year they lost another £250,000. Health visitors are joining up with the school nurses, all but 4 staff nurses in school nursing and health visiting are to go! There will be a slight increase in nursery nurses and also a big cut in band 6’s again.  Health Visitors will be expected to cover all ages.

It seems like only yesterday there was the Call to Action – a  national plan to double the Health Visitor work force, with ££££millions poured into that…and now, two years later reductions…this is madness!

Meanwhile in Lincolnshire the council took over the 0 to 19 service and scrapped school nursing. The Children’s Health webpage now shows no schools nursing service – health support for school aged children and young people appears to be limited to those with  Special Educational Needs and Disabilities:

This is in the context of the Lincolnshire Sustainabilityn and Transformation Partnership’s need to cut NHS, public health and social care spending by £182m by 2020/21, compared to what would be spent if 2015 spending levels were maintained through to that year.

The BBC reports  that:

‘Health visitors in Somerset say they have “heartfelt concerns” about plans to transfer their employment from the NHS to Somerset County Council (SCC).
The authority announced plans to bring the public health nursing team under the umbrella of a new council-run family support service from April 2019.’

This affects around 370 staff. 160 already work for the Council’s Getset scheme and 210 are employed by the NHS and would have to be TUPE’d over.

In a letter to the county council, public health team nurses said the decision felt like “a very rushed foregone conclusion” and they felt they were being treated in a “poor way” which did “not bode well for the future of health visiting and school nursing”.

“In addition, S[omerset] C[ounty] C[ouncil] is struggling financially and has closed some of the children’s centres. These closures are part of plan of cuts to the public health budget.”

The Tory-controlled Somerset County Council Executive has decided to to set up and provide an “integrated Family Support Service” that would transfer Health Visiting and School Nursing service from the NHS into the Council. The Family Support Service would be delivered in a number of Hubs across the County.

This has not gone down well with health workers, Trade Unionists and members of the public. 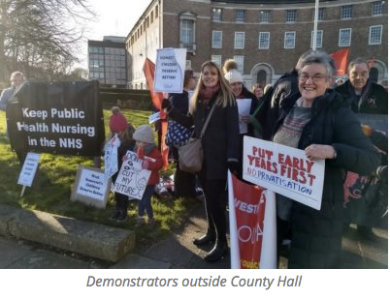 The Family Hub model was initially proposed in 2014 by the Centre for Social Justice. This is a Tory “think tank” set up in 2004 by Ian Duncan Smith and Tim Montgomerie. It played an important role in the design and development of Universal Credit.

The Centre for Social Justice said Family Hubs would offer

However, there are current measures to drastically cut the number of health visitors in Somerset by 2019, and a further £500K cuts to health visitors and school nursing services are scheduled beyond that. So how will these Family Hubs work,  if there aren’t enough health visitors to meet parents’ pressing needs? Which are getting even more pressing thanks to the government’s punitive “austerity” economic policy and Universal Credit.

The report to Somerset County Council’s Cabinet  says the plan to bring the health visitors and school nursing services into the Council has drawn on Barnsley Council’s action in bringing 0-19 services in house after a failed procurement exercise. They didn’t say that this failure resulted from Barnsley setting the contract price well below the cost of providing the services so the then-current NHS provider refused to put in a bid, since  it would have been impossible to deliver the service on that reduced sum of money. This left Barnsley Council to deliver a service that the NHS had judged could not be provided safely and adequately on the available money.