Devon Save Our Hospital Services protectors have a LOT of questions for the Health Scrutiny Committee meeting on 22 March.

So where are they going?

That is what Devon Save Our Hospital Services campaigners will be asking at the Scrutiny Committee meeting on Thursday.

Accountable Care Systems are described in the South West Academic Health Science Network paper  that Councillors seem to be relying on, as an “informal approach” where “no legal entity” is established and “contracting is still bi-lateral between commissioners and individual providers.”

Devon Clinical Commissioning Groups and Devon County Council now need to define how and whether this “informal approach” will make any difference at all to the Sustainability and Transformation Partnership’s planned NHS cuts and sell offs. 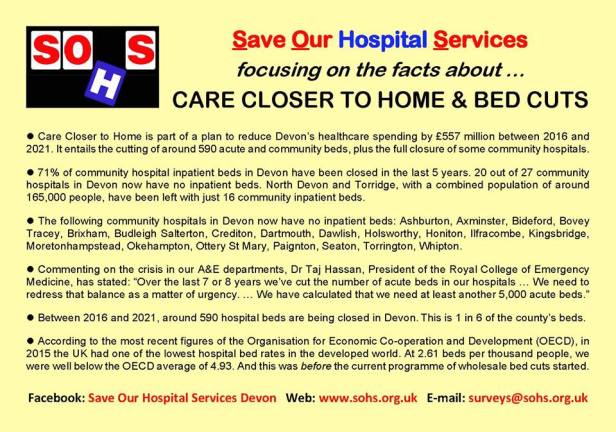 The South West Academic Health Science Network paper says Accountable Care methods – whether “informal” or carried out by a “legal entity” – include:

‘accelerating the implementation of electronic care records and the use of predictive tools to identify patients who have higher than average healthcare costs’.

This is about trying to reduce acute and emergency hospital admissions of patients with long term illnesses, as – shock horror – this costs money.

In turn, this is used to justify cuts to hospital beds and services and their replacement with under-resourced, poor quality out-of-hospital care – called Care Closer To Home, despite the fact that it often means Care Further from Home as community hospital beds are cut.

This is creating what Totally Ltd has called “a massive market opportunity” for private healthcare companies.

“It now seems clear that no ACOs will be created nationally in the near future, as a result in a shift of national policy.”

As well as the Devon Clinical Commissioning Groups’ rather vague public statement renouncing the creation of a Devon Accountable Care Organisation, Cllr Andrew Leadbetter, Cabinet Member for Social Care and Health, made a more direct disavowal of ACOs in a statement to the Devon County Council meeting on 15th February.

This statement ‘What is an Accountable Care System?’, curiously was issued only on paper at the meeting, not electronically. It announced:

‘A few areas in England are on their way to establishing an Accountable Care Organisation (ACO), where a single organisation is responsible for planning and delivering services to the whole population. This is not being considered in Devon.’

However, it no longer seems to be the case that a few areas are on their way to establishing Accountable Care Organisations.

A recent Northumberland Council Cabinet paper recommended continuing to integrate NHS and social care through existing section 75 partnerships, rather than setting up an Accountable Care Organisation,  since:

“The original plans for the ACO are not now proceeding. Discussions are ongoing with NHS England, NHS Improvement and local system leaders about how organisational relationships might now develop to support the integration of services, however the timetable for and nature of any new arrangements remains unclear…”

“uncertainty about longer term developments in the NHS…it now seems clear that no ACOs will be created nationally in the near future, as a result in a shift of national policy.”

I guess this is because the Accountable Care Organisation contract is due for public consultation, at some unspecified date.

But there’s more than one way to skin a cat.

How are “informal” Accountable/Integrated Care Systems going to work? And what further cuts and privatisation will they cause? That is the job of the Health Scrutiny Committee to find out on 22nd March.