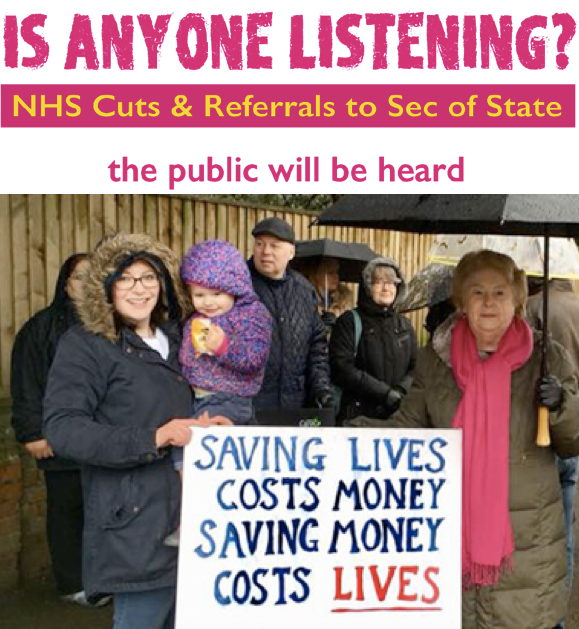 Members of local campaign group 999 Call for the NHS (Calderdale and Kirklees) are off to the House of Commons on Monday 10th September, for a meeting with MPs to discuss how to improve the process of scrutiny and review of substantial changes to NHS services.

The meeting is hosted by Paula Sherriff, MP for Dewsbury.

Along with other campaign groups from across the country, 999 Call for the NHS (Calderdale and Kirklees) will tell MPs how the process is working in their area – and ask for their help in improving it. You can download the campaign groups’ statements here (pdf).

They are campaigning to keep both District General Hospitals in Huddersfield and Halifax, each with their full 24/7 blue light A&E.

“We were pleased and relieved when the Scrutiny Committee voted just over a year ago, to refer the hospital cuts plans to the Secretary of State for Health, because they were not in the interest of the public and the NHS, and asked for them to be reviewed by the Independent Reconfiguration Panel.

This is the key body with the power to advise the Secretary of State for Health to stop and/or require changes to major NHS cuts and “reconfigurations”.
At the moment, this body is our best line of defence for protecting the NHS from cuts and changes that are galloping ahead – and are now happening to entire NHS and social care systems – not just single hospitals.

But it is vital that the scrutiny and referral process works better. The experience of most of the campaign groups who will present evidence to the meeting is that the whole process needs improving.”

The campaign group says that the scope of the Scrutiny Committee had been too narrow, and the documents they sent to the Secretary of State would not tell the whole story.

“We asked the Independent Reconfiguration Panel to broaden their terms of reference to look at the effects of successive governments’ austerity policy – meaning cuts to NHS spending in Calderdale and Kirklees. And to take into account the effects of the Sustainability and Transformation Plan – which as far as we can see is a Cuts and Privatisation Plan.

We also asked the Panel to visit Calderdale and Kirklees to talk with the public and frontline NHS staff about their views on the proposed cuts.

Sadly, they refused to do this.”

In May, after the Independent Reconfiguration Panel had given him their advice that the proposals were seriously flawed, the Secretary of State for Health and Social Care told local NHS organisations to revise them.

On Friday September 7th, the Calderdale and Kirklees Councils’ Joint Health Scrutiny Committee is meeting in Halifax Town Hall at 10.30am, to consider their response to two sets of revised proposals sent to the Secretary of State in early August, one by the local NHS Organisations, the other by Kirklees Council.

999 Call for the NHS (Calderdale and Kirklees) aim to tell the Committee that they don’t agree with either of the revised proposals, as they don’t propose to keep both District General Hospitals, each with their own full 24/7 A&E. T

The campaign group will say that – like the original plans – the revised proposals ignore the roots of Huddersfield and Halifax hospitals problems. These are not just the Private Finance Initiative, and the political choice to underfund the NHS – but also the deliberate lack of work-force. This lends credibility to the  “no change is not an option” arguments regarding the hospitals cuts, that the Scrutiny Committee, the NHS organisations, the Councils and the Independent Reconfiguration Panel all agree on.

“The local NHS organisations have basically just tinkered with the original plan, which was to dismantle the two District General Hospitals and turn Calderdale Royal Hospital into an acute and emergency hospital for both areas, and replace Huddersfield Royal Infirmary with a small planned care clinic for both areas, plus outpatients and urgent care centre.

Key line of defence for protecting our NHS

Local Authorities’ Health and Overview Scrutiny Committees have the power and duty to refer proposals for substantial NHS changes to the Secretary of State, if they determine that the proposals are not in the interest of the public or the NHS, and/or if there have been flaws in the NHS organisations’ consultations – either with the public or with the Scrutiny Committee.

The Independent Reconfiguration Panel is the key body with the power to advise the Secretary of State for Health to stop and/or require changes to major NHS cuts and “reconfigurations”.

At the moment, this body is our best line of defence for protecting the NHS from cuts and changes that are galloping ahead – and are now happening to entire NHS and social care systems – not just single hospitals.