On 20 November, 999 Call for the NHS and London NHS campaign groups held a successful and inspiring #Justice4NHS rally outside the Royal Courts of Justice. They then went into the court to appeal the ruling against our Judicial Review of NHS England’s Accountable Care Organisation contract (which the quango has since re-branded as the Integrated Care Provider Contract). 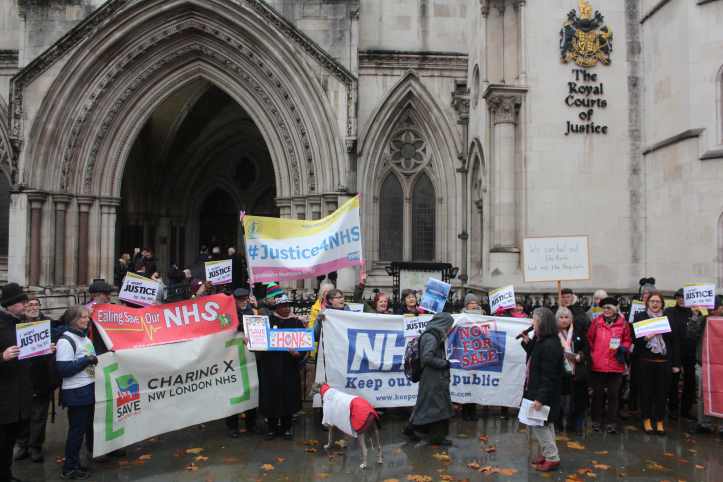 London NHS campaigners from Ealing, Lewisham, Greenwich, Brent and elsewhere turned out in force with banners and placards.  They handed out over 1K #Justice4NHS leaflets to rush hour passers by, to explain the Accountable Care Organisation/Integrated Care Provider contract and why we are challenging its lawfulness. Lots of buses, lorries and cars honked support as they passed.

The Court of Appeal hearing was a vital stage in our campaign for #Justice4NHS. This started over two years ago when – at the request of a West Yorkshire GP – we sought advice from the public law firm, Leigh Day about the lawfulness of the 44 Sustainability and Transformation Plans that aimed to dismantle the NHS into 44 cost-cutting local health services.

It also  opens the next stage in our campaign for #NHS4All. Because  – whether we win or lose in the Court of Appeal – the government and its NHS quangos are hellbent on introducing these local health services, using the new Accountable Care Organisation contract.

Speaking at the rally, Jenny Shepherd from 999 Call for the NHS pointed towards the need to think about the next stage of the campaign, even if we win our Appeal. She said,

“It seems clear from recent statements from the Health Secretary Matt Hancock, that the government wants Parliament to legislate to introduce the contract.
It is vital that if this happens, the Parliamentary opposition stops this in its tracks.
Because even if the government were to introduce legislation that could possibly rule that only NHS organisations could hold Accountable Care Organisation/Integrated Care Provider contracts, it would still be a rotten contract that aimed to cut costs and ‘manage demand’ for NHS care.
Accountable Care is not the kind of NHS that we need. We need an NHS where doctors and patients decide together on treatments face to face, based on clinical needs and patients’ values – not according to digital algorithms and financial considerations.
Accountable Care models are a cash cow for global digital technology and life sciences companies. They are nothing to do with social solidarity for the ill and infirm, which is what our NHS is and needs to remain as.”

The 3 judges asked careful questions and congratulated our barrister David Lock on a clear and efficient presentation of our case.

Our case – the public benefit is the paramount concern

Our barrister David Lock pointed out that the public benefit is the paramount concern in this case.

NHS England’s Accountable Care Organisation/Integrated Care Provider contract is a radical change to the payment arrangements in the 2012 Health and Social Care Act – far more radical than the original block contracting method that was introduced when NHS contracting started in 1993.

Parliament cannot have envisaged the wholesale abandonment of payment by results when it passed the 2012 Act – the effect of a block contract for a whole healthcare system would result in a race to the bottom, which is obviously not in the public interest.

Public benefit takes precedence over the benefit of parties to a contract, and in passing the 2012 Health and Social Care Act, Parliament legislated for a certain form of contract in law to operate in the public interest.

A contract in a different form is legally unenforceable, because the public benefit takes precedence over the benefit of parties to the contract.

In supporting the point that the public benefit is the paramount concern, David Lock explained that:

NHS England’s case – the “liberal and permissive” 2012 Health and Social Care Act allows pretty much anything.

NHS England’s barrister Fenella Morris said there is a “liberal and permissive regime” under the 2012 Health and Social Care Act – Monitor has wide discretion in drawing up rules under the National Tariff and Clinical Commissioning Groups are empowered to devise local prices, specifications, bundles and specified and non-specified services.

But she didn’t explain HOW the Whole Population Annual Payment promotes innovation and integration.

She claimed that s117 of the 2012 Health and Social Care Act (about how a healthcare service may be specified) means pretty much anything, because the list is only indicative. So it includes bundling services.

David Lock came back on 2 points

One thing that can’t be changed in that price payable is that it must be on the basis of the national price for that healthcare service – flexibilities have a defining end point, in that the flexibilities are rooted in the payment scheme.

The main judge said that NHS England said the national price means the full panoply of everything.

And with that, at 4.40pm the Judge called an end to the appeal hearing, commented on the public interest of the appeal, thanked everyone for attending – including us and all the other campaigners – and said that they would give their ruling asap but could not say if it would be before the end of the legal term -ie before Christmas – as the Courts were so busy.

We were a bit taken aback as we’d been expecting a 2 day hearing, but we were happy that our legal team had given a very clear account of our reasons for maintaining that the Accountable Care Organisation contract payment mechanism is unlawful – grounded in the key point that the public benefit is paramount and the NHS must be protected from a race to the bottom in terms of cut-price contracts.

Thanks to all who’ve donated to our CrowdJustice crowdfunder

Thanks to over 850 donations, the stretch target for the Crowd Justice stage 5 crowdfunder has been exceeded so we can pay all the costs of the Appeal plus the agreed (very low) fees for our legal team. Many thanks for everyone’s support for this.

We are now waiting for the ruling. Win or lose, the campaign to stop Accountable Care and restore the NHS continues.

If you want more info about what went on in the Court of Appeal, there is  a detailed account of the barristers’ presentations here (downloadable pdf)..